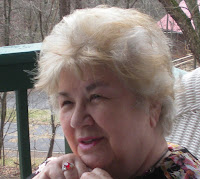 Glenda Council Beall
launched Writers Circle around the Table, a program of writing classes held at her studio in Hayesville, NC in 2010.  Besides teaching classes, she invites guest instructors for classes in poetry, family history writing, publishing, fiction, and non-fiction. Her writing has appeared in numerous literary magazines, anthologies, online magazines, and newspapers She has read her work on the Writers Show in Chattanooga.

Her poetry book, Now Might As Well Be Then, was published by Finishing Line press in 2009. A family history, Profiles and Pedigrees: Thomas Charles Council and His Descendants, was published in 1998. Paws, Claws, Hooves, Feathers and Fins was published in 2019 by Blue Heaven Press.

Glenda launched Coffee with the Poets and Writers at a bookstore in Hayesville, NC. in 2007. The event for writers has continued and now meets at the Moss Memorial Library in Hayesville, NC.
She led North Carolina Writers' Network-West as Program Coordinator from  2007 - 2009 and was elected to serve as PC again in 2017. She also serves as Clay County Representative for NCWN West.
See her membership page here.

She has been a visual artist, a school teacher, a HAM radio operator, a caregiver, a newsletter editor, a Christmas Tree farmer, a choir member, a gardener, and a sales representative. She can drive a tractor, a stick shift, and a motorcycle. She grew up on a farm with six brothers and sisters, a close and loving family. Her favorite activity when she was younger was horseback riding. She also loves to fish in a farm pond.
She is opposed to killing anything, including snakes unless they are a danger to her or someone else.
She doesn't like guns, especially military guns in the hands of civilians. She believes our country is too violent and fears for the future.

Dealing with MCS, a respiratory problem, she advocates for clean indoor air asking those who come to her home or studio to please refrain from wearing synthetic chemical fragrances on their person or in their clothes. Scented laundry detergent and scented dryer sheets are highly problematic for anyone with respiratory illness.
Glenda is overly fond of dogs and horses and has loved and lost four furry family members who lived long and good lives with her and one very special horse. Her new love is her little dog, Lexie.

Glenda is also an advocate for controlling the birth of unwanted pets by neutering and spaying.

Glenda's passion is learning and teaching. She is a very capable, empathic, and insightful writing teacher, who creates and sustains a safe, warm space for students to learn and become successful writers. She teaches writing and likes to see other writers reach their goals. She has never lost her curiosity about life, and she considers any day in which she doesn't learn something new, a lost day.

Read below for interviews and reviews