Second Draft Strategies: Taking the Terror Out of Revision
Congratulations! You’ve completed a first draft. You know it needs work, but where to begin? This three-hour workshop will supply you with a roadmap through revision that will improve your writing and calm your nerves. We’ll work our way through a structured set of questions, beginning with the big one: Have I said what I wanted to say? Others follow, concerning beginning and ending, voice, tone, tense, language, and flow. Students who wish to are invited to bring a first draft (maximum length 1,000 words) to read and critique. 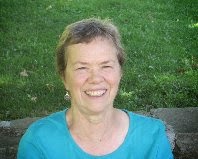 Elizabeth Hunter began her professional writing career as a newspaper reporter before becoming a freelance writer. A columnist, contributing editor and writer for Blue Ridge Country Magazine, she was commissioned to write the text for two coffee table books on the Blue Ridge Parkway and one celebrating the 150-year anniversary of Mitchell County, NC, where she lives. She is a self-taught naturalist, and has taught nature writing at John C. Campbell Folk School for many years.

Writers Circle will Continue into November

We had a week full of good instruction for writers at Writers Circle around the Table. Carol Crawford, poet, writer and editor had us writing and creating an essay that we hope to have ready for submitting this coming Thursday when she will hold the second session of this workshop.

Carol has taught writing for years and is a favorite instructor at the John C. Campbell Folk School and here at Writers Circle. Carol has been coordinating the annual Blue Ridge Writers' Conference in Blue Ridge Georgia for many years. It has become one of the best conferences and I was thrilled to be on the faculty last year.

Scott Owens, who teaches every year at Writers Circle, was one of the instructors at the Blue Ridge conference a couple of years ago. His poetry workshop Saturday here at my studio inspired seven poets who, I'm sure, went home filled with more ideas for poems than they could have imagined if they had not been present.

Several poets, as they were leaving, praised Scott and said this was one of the best workshops they have attended. After five years, I am fortunate to have been able to interest good writers like Scott and Carol in coming to Writers Circle. And our local attendees have expressed their gratitude to me for bringing in high caliber artists and for keeping the fees reasonable. As long as I can make enough to keep the lights on and keep the doors open as well as pay our instructors a decent honorarium for their work, I will continue as we have been doing.

I owe much of the  success of Writers Circle to my volunteer work with NCWN West. For several years I wrote articles about writers for the newspapers as part of my publicity duties.  I met many peopole around our region just by talking to them on the  phone. In 2007 I  became the Program Coordinator for Netwest. I attended the Spring and Fall Conferences and met members of the literary community from all across the state. I began the Netwest Writers blog in 2007 which enlarged our circle even more.

My husband was diagnosed with cancer in 2008, and I had to  curtail my duties with Netwest. When he died in 2009, I resigned. Overcome with grief and exhaustion of care-giving, I knew it would be impossible for me to continue to do what needed to be done as program coordinator.

In 2010, needing to do something useful and helpful to others, I started Writers Circle downstairs in my house. We had outstanding writers like Maureen Ryan Griffin stay overnight in my guest room and teach a Saturday morning class. Maureen's successful WordPlay classes are well-known, and she teaches at John C. Campbell Folk School in their writing program each year. She gave me advice and was willing to help me get my business off the ground. I am forever indebted to her.

The past five years have been filled with writing time, classes in writing, discussions with authors and enjoyment of having friends feel at home sitting around the table in my studio. I am never happier than being with writers and talking about writing.

Although I usually close the studio in October, this year we have a class in November also. Elizabeth Hunter who writes for Blue Ridge Country magazine will be here October 25 and delightful Dana Wildsmith will teach in November. See the Schedule page for information on the two classes.