One of the Three Memorable Days on the Cruise

We stopped in New Port, Rhode Island on our last day. The city overflowed with people attending a boat show. Sailing ships filled the harbor.
We drove out of town away from the crowds and walked beside the beach on a trail in front of mansions built by shipbuilders years ago. You can see a couple of the smaller ones in the background in the photo below.

This was one of the three days I was able to leave the ship. Although we stopped in a port each day for five days, I became ill after the second portage. Believe me, you don't want to be sick, alone in a stateroom on a cruise ship. When the ship docks, everyone leaves for the mainland, even the staff.
I felt like I had the flu. Room service said I could have a glass of orange juice sent up but it would cost me nearly three dollars. "You should send a family member out to pick up something from shore," I was told. "Yeah,"I muttered and hung up the phone. Where was the pampering I was told I'd get on this cruise?

The Filipino staff didn't understand southern English, I found, so communication was difficult in the best of circumstances.
The ship held over 2000 travelers. Most were middle-age or older, but the focus was toward a younger, more energetic group. At times I felt like this must be a Carnival Cruise to the islands. I could not find a quiet and restful place anywhere on the ship.
My mind muddled by fever, I was sure I had been imprisoned in this huge, huge ship where all around me strangers drank, laughed and shopped like they were at an after Christmas sale at Macy's.

The uniformed stewards were the army of some unseen authority and their orders were to guard me and keep me hostage, sick, in my stateroom with nothing to eat or drink until I died. Rationally, I knew I was going to live, but anxiety took control and made me crazy.

Like a nightmare in which I struggled to save myself, I suffered throughout the day, in and out of sleep, too weak and achey to get dressed to go out and find food or drink. From burning temperatures to chills, I threw off the covers only to reach for them again when I began to freeze.
Looking back I realize it was the total helplessness I felt that provoked the fears that rushed in like animated monsters in a kids' movie. Like I was when I was a child at camp, I wanted more than anything to go home. I'd have given everything I had to be home in my bed with my dog and my cat beside me. It was several more days before we disembarked in New York City, but finally I am here and I plan to stay. 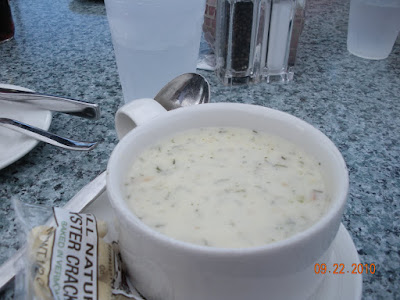 This was the best clam chowder I've ever eaten. It had sprigs of dill in it. We found this at The Pier on the waterfront in New Port R.I. 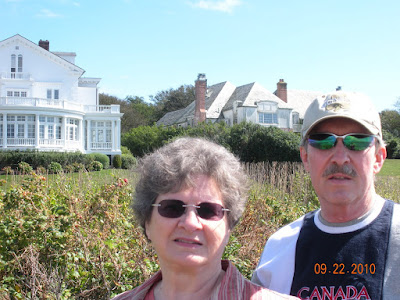 My companions on a recent cruise to Nova Scotia, New Brunswick Canada and New England.
By Glenda Beall at September 21, 2010 1 comment: