A Story About a Dog

Today I will share an excerpt from Paws, Claws, Hooves, Feathers and Fins; Family Pets and God's Other Creatures by Estelle Rice and Glenda Beall

I have found that when you are deeply troubled, there are things you get from the silent devoted companionship of a dog that you can get from no other source.   ---Doris Day 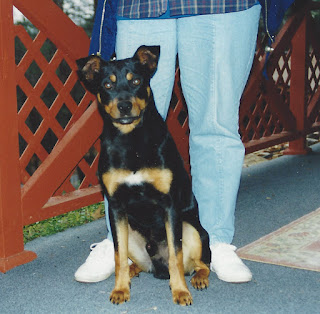 Rescued by Love
By
Glenda Beall

Bundled against February’s cold, my husband Barry and I walked along the road near the Hiawassee River, making our way up to Chatuge Dam where we would find a flat trail for our morning walk. At the corner of the main road and the road to the weir, a puppy lay under a bare limbed tree. Stretched out on his belly, head up and ears alert, he watched the road before him as though he expected someone to appear at any minute.
Barry talked to him as we approached. “Hey, Bud, what are you doing here?”
When we came closer, the dog moved away from us and growled low in his throat. Obviously, he was frightened.
“I hope he doesn’t get hit by a car. I think he’s been dumped out here. He’s not very old.” Barry loved animals. It angered him to see them abused. “How could anybody throw away this puppy, and on a cold day like this?”
A dog’s tail can show his attitude, angry, cowed or happy, but this dog’s tail had been bobbed to a short little nubbin.
“He has the coloring of a Doberman or Rottweiler,” I said as we continued to walk past. I hoped he would be safe. He was close to a fairly busy road.
Later, on the way back to our car, we saw the dog again, and this time he ran when we approached.
Back home after lunch, I read a book while Barry napped. Around 2:00 p.m., after he awakened and watched some golf on TV, Barry said to me, “I’m going to take that dog something to eat if he is still there. I imagine he’s been picked up by now, but I hate to leave him with nothing to eat.”
He pulled a couple of cans of dog food off the shelf in the pantry. As he left, I thought about Kodi, our lovely and sweet Samoyed who stayed on my mind most of the time. We had to put him to sleep on Christmas day. That had been only a couple of months before. Kodi was thirteen years old, snowy white with fur as soft as down. His black eyes had become a milky blue, but his smile was the same. I never looked at my loving white sled dog that I didn’t smile back at him. The last four years of his life had been tough for him and for us. He had developed corneal ulcers on both eyes. We’d taken him to specialists and finally cured that problem, but his hips began to fail. Getting to his feet became a struggle, and often I had to lift him up off the floor so he could get his footing. But he continued to steal my heart with his gentle way of leaning against me and laying his muzzle across my knee while I stroked his head.
Everything in our house reminded me of my beloved pet: his food bowl, his pink toy with chewed ears and even the recliner where I sat. I still checked under the foot rest before letting it down to be sure Kodi was not lying there, right under my feet, as he had done for all those years.
A friend, a few weeks after Kodi died, told me we should get another dog right away. “No,” I said. “I don’t want another dog. I can’t stand losing another.” The only dog I wanted was gone.
When Barry said he would like another dog, I said, “I don’t want a dog now. If I ever do get another dog, I want a small lap dog.”
I knew Barry did not want a small dog, and I wanted no dog at all. Nothing was fun anymore. And only my dearest friends and my sister knew how devastated I really was over the death of Kodi.
That Saturday afternoon in February, as I sat warm and cozy reading, Barry knelt on the ground near the black and tan pup, coaxing him to come eat from the can in his hand.
Two hours after he left, I heard my husband’s happy voice calling from downstairs in the basement. “Come down here and see what I have. I brought this puppy home with me.”
I heaved a large sigh. I didn’t want a mutt found beside the road. Who knew what kind of health problems he had? And I didn’t think he was handsome. He was just a mixed breed puppy with no tail.
“We’ll have to find his owner or find a home for him,” I said. I made sure Barry knew there was no way I was going to keep this thrown-away dog. He agreed that we would use every means to find the owner, and if we couldn’t, we would find a good home for him.

This is part of a story you will find in the book and there are many more.
By Glenda Beall at November 08, 2018 1 comment: