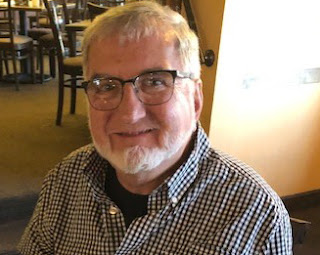 Roger Carlton is our guest on this blog. He has another thought provoking post about our political situation today. CAN WE HANDLE THE TRUTH is a good question we must all ask ourselves.
Roger is columnist with the The Graham Starr newspaper.
Jack Nicholson in "A Few Good Men" famously said "You can't handle the truth." This line has stuck with me since the 1992 legal drama directed by Rob Reiner was released. Two hard to handle truth moments arose last week in an article in The Atlantic magazine and with the release of Bob Woodward's new book Rage about President Trump. The first question is whether or not we were told the truth? The second question is what are we going to do about it when we vote in the upcoming election?
The Atlantic magazine has been published for 163 years. Early writers included Ralph Waldo Emerson, Herman Melville, Harriet Beecher Stowe and Nathaniel Hawthorne. The publication's editor in chief is Jeffrey Goldberg who has won many journalism awards and is viewed by his peers as having impeccable credentials. This publication is no National Enquirer that reports weekly about miracle diets, impregnation by Martians and the imminent death of some famous person.
The September 3, 2020 edition carried an article about the President's disrespect for the military. The President was quoted describing military personnel as "losers" and "suckers." Earlier statements disparaging Gold Star parents and describing Senator John McCain in the context of "I like people who weren't captured" were used to show a pattern of disrespect.
Response to the article was strong. The Biden campaign jumped on it to their advantage. The Trump campaign said comments were taken out of context and it was fake news. If there was a weakness in the article, it was that the people who spoke to Mr. Goldberg were not named. This was not about distorting the truth; it was fear of retaliation from the White House.
Rage is the summation of 18 face to face interviews with the President. Woodward is a modern-day reincarnation of Edward R. Murrow. Woodward has covered presidents since Nixon. Along with his Washington Post colleague Carl Bernstein, their book All the President's Men exposed the Watergate scandal and eventually led to Nixon's resignation. One thing is certain, Woodward is an impeccable researcher and may be my generation's most famous journalist.
Edward R. Murrow was a TV newscaster and commentator who sank Senator Joseph McCarthy in a journalistic evisceration that would probably not pass an editor's scalpel today. McCarthy was a serial liar who ruined the lives of many people by labelling them Communists. The times were scary at the beginning of the Cold War with Russia just as they are today with economic malaise and COVID 19 deaths.
If there is a weakness in Woodward's Rage, it is regarding a journalist/author's responsibility to release news that has a critical impact rather than wait until the book is released. Since the President admitted he knew in January 2020 about the dangers of the Covid 19 virus from sources in China and told Woodward in one of the interviews, why didn't he report on that revelation immediately?  Would not releasing the President's own admission about not wanting to alarm the public have shamed the White House into doing something much earlier and saved many lives? Woodward's response that he is an author and not a reporter seems weak. His stronger response is that many other reporters were covering the White House's denial of the severity of the crisis.
So, what are the ethics that both The Atlantic article author and Woodward should be guided by? The Society of Professional Journalists has a Code of Ethics. This guidance says "Journalists should take responsibility for their work. Verify information before releasing it." The Code also says "Consider sources' motives before promising anonymity." One final piece of advice is "Journalists should balance the public's need for information against potential harm or discomfort. Pursuit of the news is not a license for arrogance or undue intrusiveness."
It seems to this columnist that both bombshell revelations last week met the test of journalistic ethics. The air is escaping from the Washington balloon at a faster pace due to these extraordinary journalistic works. The real question is whether or not anyone has changed their mind enough to change their vote? That is something to think about.
By Glenda Beall at September 24, 2020 2 comments: